Congratulations to Hal on being named a 2015 Skyline Awards finalist! 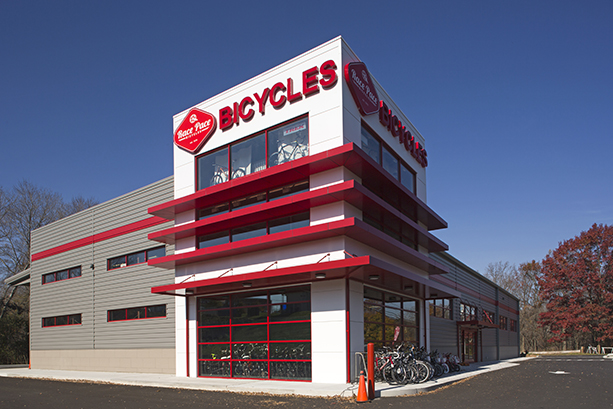 Race Pace, located in Ellicott City, was an adaptive reuse project of an existing pre-engineered metal building warehouse and office. To make this a successful retail use for today’s market, a 3,000-square-foot pre-engineered addition was erected at the south end of the existing building. The north end of the building was previously used as a warehouse, while the south end was a small, two-story office with a 500-square-foot retail counter.

During construction, the building was stripped of its metal siding so a continuous board insulation layer could be installed outside the purlins. The existing corrugated-metal roof was removed and replaced with a new, highly reflective standing-seam metal roof to reduce heat-island effect. The tower was clad with factory-prefinished, smooth exterior skin insulated metal panels with additional batt insulation on the interior side. Vestibules were created at both the main entrance and service entrance to limit the amount of unconditioned air entering the building. Large canopies and architectural fins were designed into the building to limit the amount of direct sunlight entering at the retail level.

The building went from a very poorly insulated warehouse to a highly efficient retail building that surpassed the prescriptive requirements of the 2012 International Energy Code. The small project created a big impact to the intersection and property value. The neighbors are thrilled with the revitalization of the corner and visual improvement of the site from what had become an eyesore to the neighborhood and the Route 40 redevelopment zone.

Using a client-centered approach, AHSa focuses on what makes each client and each project unique to realize its vision in our designs. Our goal is to move beyond the first project to become a trusted partner with our clients, providing value and expertise to help them grow, evolve and move into the future.